Nobel Laureate Martinus J.G. Veltman, member of the International Editorial Board of Acta Physica Polonica B, lecturer at the Cracow School of Theoretical Physics in 1977 and 1994 passed away on January 4, 2021 at his home in the Netherlands. He was 89. A few months earlier he contributed with a very moving personal address to Acta Physica Polonica B on the occasion of the 100 years anniversary of our journal, which has been included in the preface to the special jubilee volume Acta Physica Polonica B51, 1023 (2020) .

Professor Veltman is the author of the two most quoted articles published in APP B: "Second Threshold in Weak Interactions" and "The Infrared–Ultraviolet Connection" which have gained more than 900 and 700 citations, respectively. He contributed not only to physics of fundamental interactions but also to the development of dedicated computer language for algebraic calculations, called Schoonschip, which paved a way for modern applications of this kind.

We would like to express our grief, alongside the entire physics community, at the loss of this outstanding scientist of a very special, open minded and forthright personality.

The memory of Tini Veltman will stay with us. 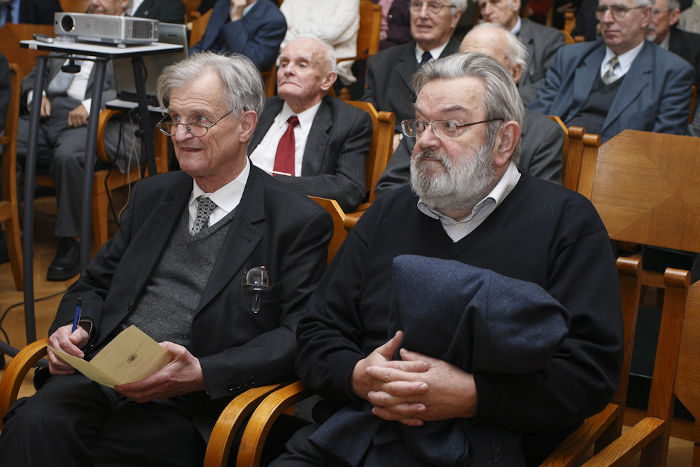 Martin Veltman (right) with a former Chief Editor of APPB Kacper Zalewski at the conference "100th anniversary of the birth of Professor Marian Mięsowicz", Polish Academy of Arts and Sciences in Kraków, November 2007. Photo by Bogdan Zimowski.

Acta Physica Polonica B is an abstracted, refereed journal published by the Jagiellonian University, Kraków, Poland, in cooperation with the Polish Academy of Arts and Sciences.

Since 1999 all current and past articles are freely available on an Open Access basis and under the conditions
of Creative Common License, CC-BY 4.0. Starting from January 1, 2014 we are partially funded by SCOAP3.

To prevent plagiarism we use the Crossref Similarity Check service.

Acta Physica Polonica B covers the following areas of physics:

No fee is charged from authors.